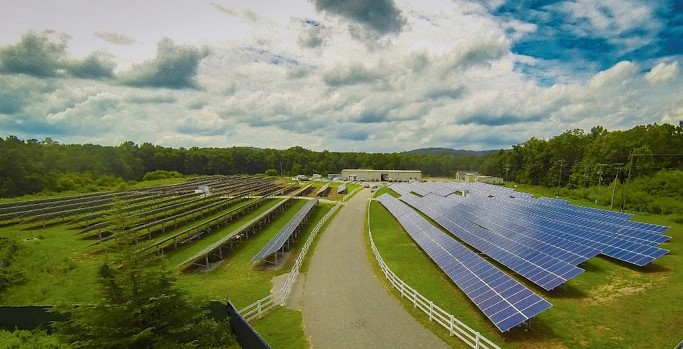 CHAPEL HILL — The thicket of aluminum crossbars, rising shoulder-high and gleaming in the sunlight, could easily fill several football fields. In less than two months, this geometrical framework sprouting in Chatham County will be covered over by an indigo meadow of solar panels.

With projects like this and bigger ones in the works, 3-year-old Strata Solar has rapidly become the state's dominant developer of solar power. The Chapel Hill company has designed or proposed more sunshine-to-electricity projects than any of the state's estimated 75 solar developers and installers.

Strata Solar plans 15 industrial-scale solar farms for completion this year – including three in Wake and Chatham counties – each with a power capacity of about 5 megawatts. Strata Solar executives are closing in on a deal that would be the state's biggest solar farm, at about 20 megawatts.

Meanwhile, the 40-employee company is already looking beyond North Carolina, having opened offices on the West Coast in a bid to break into solar markets in California and Hawaii. Strata Solar's domination in the state results from aggressively courting investors for major solar projects, leaving other developers to focus on smaller residential and rooftop projects.

The reigning sun king of this photovoltaic empire is Markus Wilhelm, 54, a former publishing executive who honed his business acumen in direct marketing and book club promotions. A German transplant to Chapel Hill, Wilhelm doesn't display the apostolic fervor of longtime solar enthusiasts; rather, he's fixated on bottom lines.

Strata Solar is powering a solar boom that has resulted in 584 megawatts of electricity developed or proposed – about half the size of a nuclear power plant – since the state legislature passed a green energy mandate in 2007.  The rapid expansion comes at a time that the cost of solar panels is plummeting to historic lows and reducing the economic barrier to building solar farms. A fifth of the state's solar projects were proposed just in the past seven weeks, mostly by Strata Solar.

Wilhelm says that falling solar costs eventually could render this country's generous solar incentives obsolete, even though today more than half of the cost of a solar farm in North Carolina is subsidized with federal and state tax credits.

The cost of solar panels, including installation, has fallen from about $9 a watt to $3 a watt this year, and could fall to $1 a watt in several years, Wilhelm said.

“If we keep the current trend going, we are not going to be dependent on major subsidies by 2016,” Wilhelm said.

Just a few years ago, electric utilities paid more than 16 cents a kilowatt hour for solar energy, premium included. Today they're paying less than 9 cents, Wilhelm said. The precipitous decline reflects the shrinking premium payment that solar developers have had to charge to make a profit. If that premium disappeared altogether, solar energy would cost about 7 cents a kilowatt hour.

“The price Duke Energy is paying for solar energy today is competitive with other renewable resources,” Duke Energy spokesman Jason Walls said. “With this drop in price, the company believes that solar will play an increasingly important role in meeting the state's renewable energy portfolio standard.”

Wilhelm is plenty keen on the ideal of sustainability, but he is not inclined to mix business and personal causes unless there's money in it. Wilhelm's quarter-century of publishing experience includes stints with Bertelsmann AG, Bookspan and Doubleday Direct, and chairing the Direct Marketing Association.

“When an industry matures, the marketing people take over,” he said. “At the end of the day, it's a business more than anything else.”

After leaving publishing, Wilhelm moved from New York to Chapel Hill, picking this area based on favorable news reports and its sophisticated vibe. He invested in green home construction but latched onto solar as the surest financial return.

Starting off small in its first year, Strata Solar developed small solar projects for homes and small businesses. In its second year, the company expanded to larger, ground-mounted projects. Now it's scaling up to huge solar farms.

The company has about 10 megawatts in operation and expects to be close to 100 megawatts by the end of this year. Because solar power is intermittent, working only when the sun shines, solar megawatts are not equivalent to round-the-clock power plants that use uranium, coal or natural gas as energy sources.

Strata Solar's site now under construction in Chatham County is on the smaller end of Strata's solar scale, totaling 1 megawatt, a size unheard-of in this state just a few years ago. It's designed to withstand 90-mph sustained winds and will take less than three months to build.

On a recent visit, a crew of several dozen supervisors and contractors were at work, moving metal sections into place, as others power-drilled solar panels at 25-degree angles to maximize sun exposure.

Company executives now talk about closing in on 1 gigawatt of solar power, the equivalent of a 1,000-megawatt nuclear plant.

“By 2013 we can build at least 100 megawatts a year,” said John Morrison, Strata Solar's chief operating officer. “In the course of a decade, we should be able to build 1 gigawatt of solar. Do you know how long it takes to build a nuclear plant? About 10 years.”